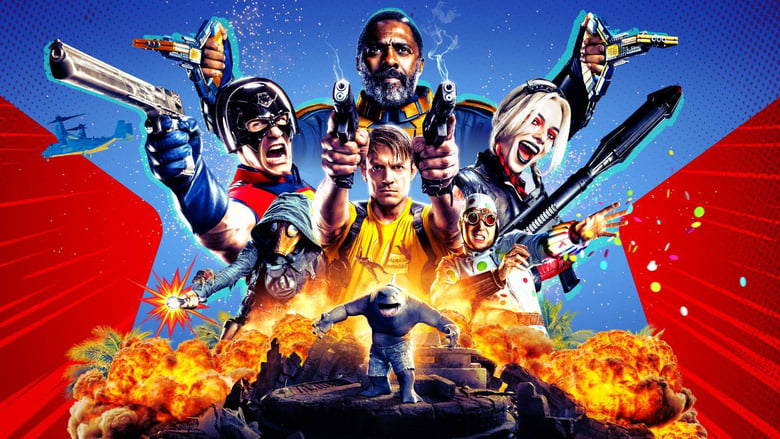 I have to admit, when it originally came out, I kinda liked Suicide Squad. I saw it in theaters and at home with my family a bunch of times but it wasn’t after about a year or two ago that I realized it is actually quite… abysmal. The plot is messy and shakes around from all sides, the characters are bland and poorly developed, the villain a comedic joke and I just felt no sense of fun coming out of it, other than in Margot Robbie’s performance as Harley Quinn. The Suicide Squad (the “The” here is very important), is basically the complete opposite.

So, this is not Suicide Squad 2. It’s a standalone thing that apart from recurring characters doesn’t reference the 2016 movie one bit. After James Gunn was fired by Disney because some tweets popped up that didn’t age well at all. He was laid off of Guardians of the Galaxy Vol. 3 and apparently Warner Bros rushed to the occasion to offer him any movie he wanted for the DCEU. This means we now live in the best timeline, since we got this movie now, the Peacemaker series coming up and Guardians 3 still being made by Gunn, since Disney rehired him for the project. So, now that we got that out of the way, what’s up with this movie?

Yeah, that basically sums it up. As the title suggests, this movie is absolutely crazy. There is so much going on and it just drops you right into the action. It starts out fast, introducing you to the concept immediately and then going straight into the plot. The story itself revolves around the Suicide Squad needing to retrieve information from a place called Jotunheim on a South-American island named Corto Maltese. The island is subject to a lot of political problems and the film manages to comment on that without distracting from the fun and goofy nature of what it is. It does paint both of the sides of the conflict between the US and this small nation as “the bad guys”, which I can definitely see being off-putting for some, but I’d say it makes sense you’re seeing this all from the perspective of literal super-villains.

The movie is violent. Like, really violent. Every member of the Squad are cold-hearted murderers (they will not let you forget these are still supervillains) that have no problems with disposing of human lives. They’ll even make it into a competition, which leads to some hilarious moments. The action scenes are fun, engaging and made me laugh a lot. The action is incredibly over the top and the movie knows it. It wears it’s goofiness as a badge of honor and just wishes to entertain, which it certainly did for me.

This flick has a lot of characters in it. All of them (mostly) have a unique set of skills that make them so goofy and interesting to watch. Oh, and what you read about not all of them making it out? That’s very true, let me tell you. People die in this movie and they die in some gruesome ways. You might be disappointed that some of the characters you were excited to see didn’t get all that much time to shine, but honestly the emotional core of this movie still gives you a lot to love. It’s solid and honestly more characters would just bog it down, so I’m happy that it’s the way it is.

Rick Flag is back, Captain Boomerang is back and of course, Harley Quinn. Margot Robbie just embodies the role so perfectly, it’s amazing to look at. It leads to an incredible scene that at first, had me kind of worried since it seemed to undo quite a bit of the development she got in Birds of Prey but it fixes itself in the end and in a stellar way. Aside from the returning cast, there’s a lot to love in the new characters. Obviously there’s Weasel, who is a giant man-like weasel and King Shark who is voiced by bloody Sylvester Stalone, like what the hell. For the rest of them, I loved Idris Elba and John Cena, their characters were a ton of fun to watch. I’m very excited to see Cena again as Peacemaker in the spin-off series and Bloodsport got some really good development.

My favourite character is definitely Ratcatcher 2 though. Her real name is Cleo Cazo and she really is the emotional core of the film. She’s quite close to Bloodsport and is easy to relate to. Her powers are that she can summon rats and command them to do her bidding, which is gross but also very awesome.

Now, for some other things I still want to mention since they were so good and really shouldn’t be left unsaid. First of all, the soundtrack. James Gunn already perfected the use of music in the Guardians movies and in this one, it’s nothing less. The music really adds to everything that happens on screen and it’s an amazing achievement. Something else I really liked were the transitions for locations and time periods. Instead of having text appear on the screen, they made it so things happen in the environment that spell out the locations and such, just like a comic book. It’s just a little touch but it really added to the experience for me.

The Suicide Squad is an amazing experience and really shows how much not tampering with a movie a month before it’s set to release can help. Although on the other hand, maybe if the original did turn out decent, we wouldn’t have had this flick, so there’s a silver lining!
The story, the characters, the music and the visuals make the movie pop out the screen in a really fun way and I’d say this is one of the most fun movies I’ve seen in a while. While some moments that will probably net me yelling from people calling me woke or an SJW didn’t quite connect and were a little distracting, they’re small enough issues that I really can’t crack down on the movie for them. It’s good, go watch it, go watch it, come on.