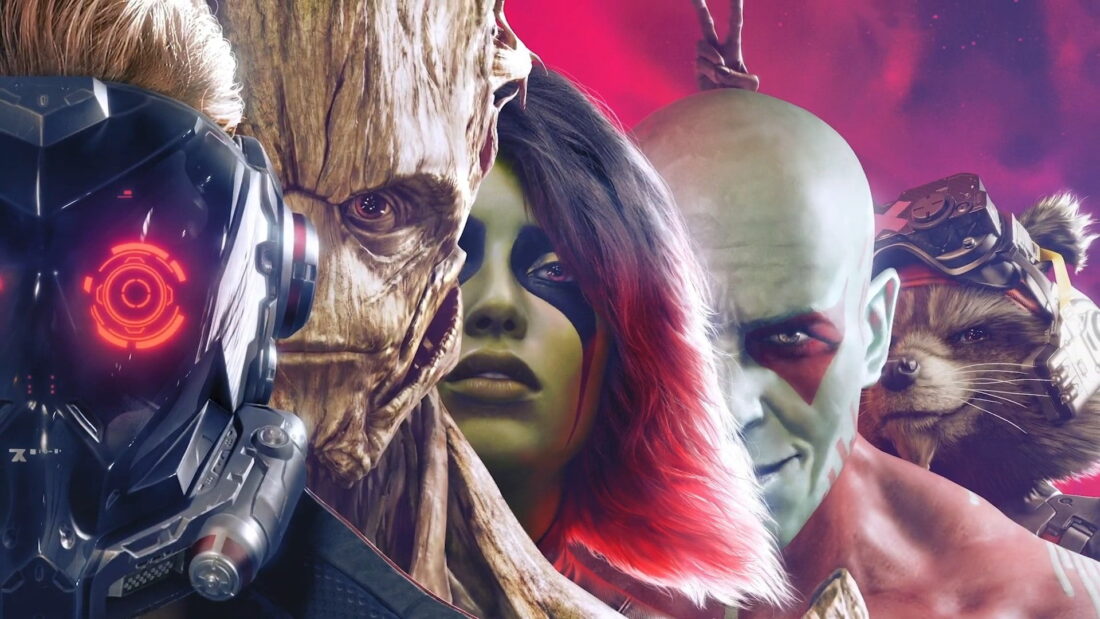 When the first trailer for the Guardians of the Galaxy game aired the reception was not that great. Having just gotten the overwhelmingly disappointing Avengers game, a lot of people were wary of how Square Enix would handle another Marvel title. I too wasn’t too hyped at the initial reveal, planning to pick it up at a sale or something a few months in, but when reviews started coming out it actually seemed like something that would be right up my alley.

Gardeners of the Galaxy?

There’s something strangely awesome about pressing a button, seeing your team run over to you, giving them a short speech and then beating a boss with Wake Me Up Before You Go-Go from Wham! playing, and Marvel’s Guardians of the Galaxy has exactly that. In this game you follow, naturally, the Guardians but in a bit of a different context. Fans of the movies won’t see the team’s composition change all that much since it’s still Star-Lord, Gamora, Drax, Rocket Raccoon and Groot, with a few familiar faces appearing along the way and some new ones too. But these are not really the Guardians you might be familiar with, mostly in terms of their backstory though since their personality stays pretty consistent with other appearances in media. Drax still takes things way too seriously, constantly calling Star-Lord by his full name (seriously, I don’t think he even once said Peter and Quill seperate from each other), and Rocket still has his “explosive” personality but these do feel like a bit different people. That might not be very appealing to some, but I really liked it as it allowed for a different view on these characters than the one we’ve looked at for the past few years. Not like I don’t love the MCU’s take on these characters, I am completely in love with them but I think it really adds to the game that these people have lived different lives.

Throughout the different chapters you can find costumes and objects that have a connection to one of the Guardians. When you then get back to your ship you can strike up a conversation with one of the team members which provides a lovely bit of insight on them and really lets you dig into their story. The characters are simply very well realized and along with the story it really carries this game to greatness. It really feels like you’re the leader trying to keep this band of misfits together and seeing your connection to the team develop over the course of the game really solidifies that feeling. The outfits are also awesome, referencing a bunch of Guardians storylines and it felt great to mess around in Photo Mode since you can really make some fun shots in this game.

So, how about the gameplay? It’s fine. It’s nothing too crazy but it works. You only play as Star-Lord, but that wasn’t really an issue to me, since in a way you still control the other Guardians. You can command to use special abilities and use some of your own. It’s not a very deep system and there’s honestly not a lot of challenge, at least on the normal difficulty. That doesn’t really matter to me though, since the boss fights can get pretty crazy and the “wow-factor” will really be what’s most prominent with them. The rest of the combat encounters are big shoot-outs where you dash, shoot, command until you’re done. You’ll be earning ability points that you can then use to invest in certain skills for your Guardians. It’s nothing too deep, but it works. Still, the constant quipping and talking between the characters is fun to listen to and again distracts from the kind of repetitive combat.

The worlds you visit are absolutely gorgeous and full of hidden secrets like costumes and components to upgrade Star-Lord. While this is a linear game, there are enough options to walk around the planets for a little while and find some fun stuff. Meanwhile you’re solving puzzles (which I was actually capable of solving, hurray!) and platforming to where you need to go. It’s all actually very similar to Uncharted and it works incredibly well. While the story and characters really carry this game, the gameplay is good enough to keep you playing until that next big moment or piece of character background.

I absolutely loved the story of this game. It’s typical Guardians shenanigans but with how well the characters are realized it really became even more engaging. Basically the story is about this cosmic cult that’s trying to take over the galaxy with something called The Promise, and of course the Guardians can’t just let that happen. It all starts out goofy though, and even though there’s quite a lot at stake the characters and overall tone of the game stays optimistic and light-hearted. That isn’t to say there isn’t time for some very heavy-hitters though, since there were a few times I was genuinely shocked and moved by what was happening and actually let out a few tears. It was some of the most fun I’ve had with a video-game story since Persona 5 Strikers, which this game is definitely now up against in terms of what will be my GOTY.

The atmosphere is of course helped by the awesome soundtrack consisting of original tracks, classic ones and new rock songs created by an in-universe band called Star-Lord. Even if you don’t want to pick this game up yet, listen to the soundtrack. It’s on Spotify and it rocks. But there is a small thing I will say, namely that the game has some bugs and glitches that can be a little annoying. There’s nothing game-breaking or anything, but it is worth mentioning that some things might not work as well as they should, but honestly that’s about the only thing that’s really worth mentioning as a downside.

Guardians of the Galaxy is the biggest surprise of this year to me and a serious GOTY contender. While it’s still a little buggy at times, the decent gameplay, greatly fleshed out characters and fun but heavy-hitting story make this an incredible game for both fans of the Marvel universe, and Guardians specifically too, and people who just want a fun adventure game set in space.