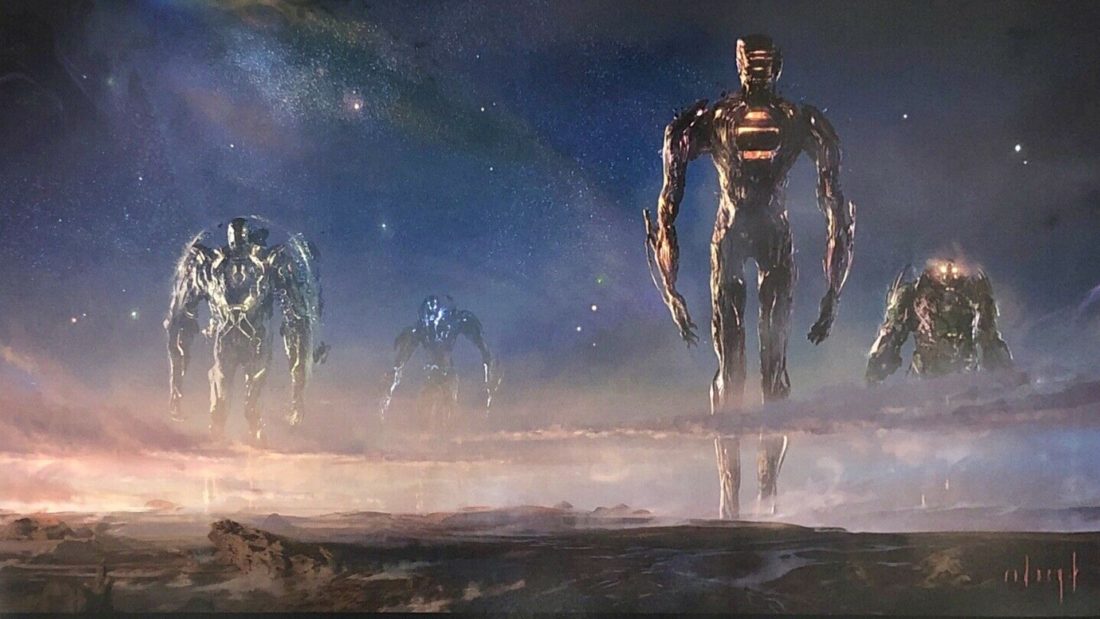 Today a poster for the long awaited MCU installment “The Eternals” was leaked. An actor for the movie, Ma Dong-Seok (Train to Busan), posted a picture online with him pointing to a package of Eternals related stuff, and yes, also a poster.

The Eternals will be Marvel’s next big team-up story after the fan-favourite Avengers: Endgame. The film will follow an all new set of heroes based on the Eternals comics by Marvel Comics.

Something far more interesting than the characters standing in line however, are the lights in the sky. As those are a direct reference to Eson the Searcher. A celestial being who was also seen in James Gunn’s “Guardians of the Galaxy”. But he wasn’t the only celestial being in the franchise, as in “Guardians of the Galaxy Vol. 2” Peter Quill’s (Star-Lord’s) father, Ego, was also revealed to be a celestial. The severed head that made home to the mining colony “KNOWHERE” also belonged to a celestial.

In that first Guardians movie, we saw Eson wielding the Power Stone to decimate an entire planet. This might be what our band of new heroes could be up against. It would certainly be a nice reference to GotG, which also had the Power Stone as a major factor in its plot. It would also be in reference to rumours saying The Mad Titan Thanos could appear in Marvel’s next big team-up movie.

All of this is still purely speculation, as nothing can be said with certainty yet. We don’t know about the role Eson is going to have, but going about this poster it could be a rather sizable one. Still take all this with a nice grain of salt. We will all see for ourselves when The Eternals releases on it’s currently planned release date of Februari 10, 2021.