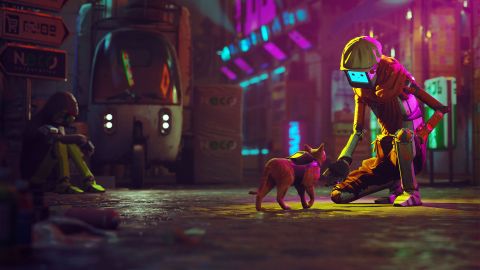 I’ve been playing a bunch of games lately, but not all of them really compelled me to write an insanely in-depth review, opting to instead write a smaller review with my thoughts in a more summarized way over on Backloggd (you can check out my profile if you’re interested). So just like I sometimes do with my movie reviews, I thought I’d round up some of the reviews I’ve written over the last month so you can take a look at those. I hope you enjoy!

Stray is one of those great short but sweet games. It doesn’t even take 5 hours to beat (unless you focus on getting on all the collectibles, then you’ll probably hit those 5 hours, maybe one more) but it managed to reel me in and invest me into this world and its inhabitants through the eyes of an adorable cat. Walking around this dystopian city would probably already fill me with wonder, but doing it through the eyes of a cat, jumping around on boxes and tubes just added to that wonderful feeling.

It’s not really platforming in the sense that you can constantly fall down and lose your progress, but jumping around, as I said, is a pretty big part of the game. This makes it so that in the last hour or so it kind of lost some of the excitement for me, but it works and again, the atmosphere is simply top notch.

In terms of other obstacles you’ll mostly be running from little meatblobs with glowing eyes, sneak past a bunch of drones or you will be looking around a large area for a specific item to give to a specific character so you can progress. These things as well are a lot of fun the first few times, but luckily as soon as it starts to get a little stale, the game is over.

The thing I come back to the most though is, again, world itself. It completely sucked me up from the moment that there weren’t even any NPC’s present. The levels and area’s themselves just feel so well-realized and thought out, looking beautiful from any angle you look at it (which makes the lack of a photo-mode even more glaring). Once you do start to meet some characters though, they are also integrated into the world beautifully and really added to the kind of cute but somber vibe that is present all throughout Stray. I’d say it’s absolutely worth your time.

Hyper Light Drifter is a difficult top-down hack and slash game where you play as the titular Drifter. From the moment I started the game I was already blown away by the incredible artwork and music, which made for this eerie and kind of somber atmosphere.

Throughout the entire game the amazement at the environments stayed present. Every area has its own identity and all of them are a lot of fun to explore. You’ll be moving through a number of zones to activate beacons and eventually… do something.

In terms of story this game is a bit unclear. It starts out strong and mysterious, but it never really gets any more clear. There are NPC’s in the game that tell you small stories through images (there is no dialogue at all, which is pretty cool) and those stories are pretty intriguing. There are certain secret paths to what seem to be lore tablets of sorts, but there was nothing I was able to gain from that. Maybe I just haven’t been interpreting it right, or maybe it’s just purposefully very vague, but I think if it was a little more clear it would be even more compelling.

Then finally the gameplay. Hyper Light Drifter can be quite tough. You’re going to be dashing around rooms, dodging attacks and bullets while slashing back at hordes of enemies. Throughout you’ll gather materials for upgrades so you can get extra skills like a chain-dash or deflection of projectiles. The boss-fights are pretty vicious but not insanely hard. Still, there are some moments where your dash isn’t working with you which makes some hits feel a little unfair. It doesn’t happen a lot, but when it does it’s frustrating. Overall though, the combat is smooth and traversing the world works very well.

I would definitely recommend it to anyone who’s interested, as long as you realize it can be difficult and the story is a bit too vague, but outside of that those 8 hours I spent to beat it were all worth it.

Plays pretty nice, and the environments are cool but I felt like I finished it in the first 5 hours while the story went on for 3 more. Made it a bit of a drag to play.

Such a blast! I got this game in a bundle with my PS5, and holy crap it really does seem to be one of the best showcases of what this console is capable of. Both in the department of graphics and gameplay it’s incredible. I’m sure you’ve already heard this before but this game really looks like a Pixar movie in terms of quality.

The story is simple but told very cutely. I think if you’ve played the 2016 game you’ll know exactly what you’re in for, and I don’t say that as a bad thing. It’s not a very long game (I played on Hard Mode and while taking my time it took me roughly 12 hours to beat) but it is back to back quality and fun. This game is just a whole lot of fun. The new and returning characters were also great, namely in the alternate duo to Ratchet and Clank, that being Rivet and Kit. These characters get a lot of time and love which is why I would definitely like to see a game fully centering on them. Also the game is just genuinely quite funny. It’s corny and doesn’t take itself too seriously but it does so with pride, which makes it so fun to play.

The gameplay is also pretty damn great. It’s everything that worked about the 2016 Ratchet and Clank, and then some more. You’ll be teleporting around using rifts, dashing and jumping out of the way of enemy projectiles while you’re shooting back with your insane arsenal of weapons. Every weapon has its own quirk and that’s also where the adaptive triggers of the Dualsense controller come in. Both this and the haptic feedback feel great. While I definitely found myself using certain weapons more than others because they simply felt more effective, that might be because of the higher difficulty I was playing on.

Rift Apart did still have some goofy technical problems, and while the story was very enjoyable in itself I hoped for a little more craziness but if you have a PS5, I would say this game is a no-brainer. It showcases the capabilities of the console really well. I’m definitely going to try and 100% this at some point when I get rid of more of my backlog!

This game is a great experience. There’s gorgeous art, a great soundtrack and interesting puzzles. The story is great for the most part, apart for the ending. I wasn’t the biggest fan of what happened after the tearjerker, but I’d still recommend this game to anyone who’s looking for a puzzle game to play for a few hours.