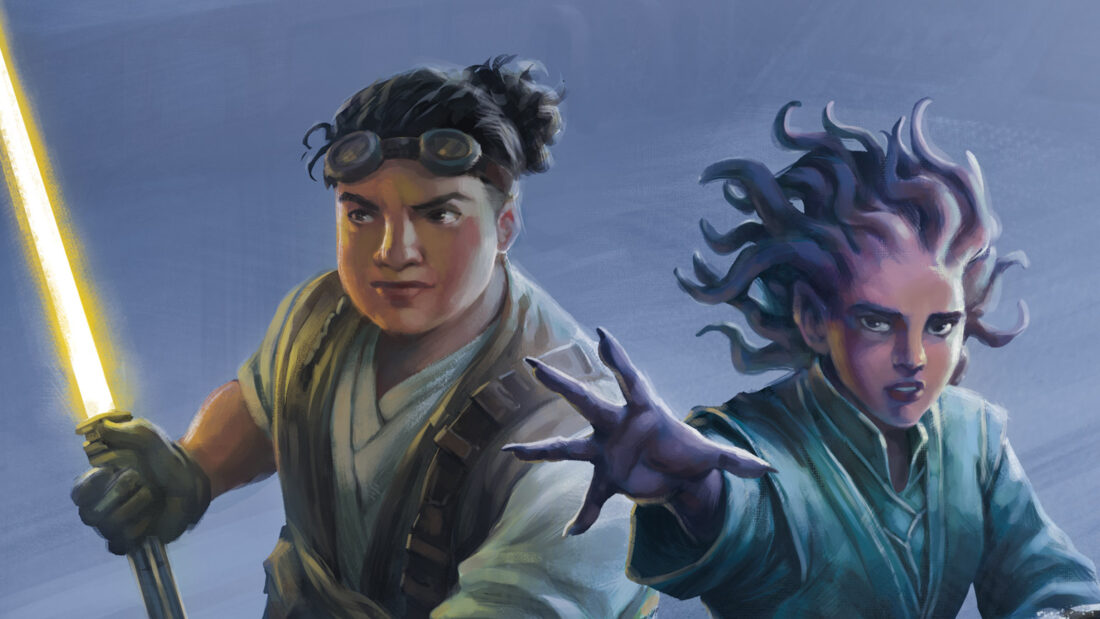 On my shelf I have standing the beginning and ending of Star Wars The High Republic Phase One. Light of the Jedi kicked off Project Luminous last year and since then we’ve gotten a great number of books and comics. Now that story has been closed off with Midnight Horizon. While I haven’t actually read a lot of the other books from this phase yet, (only A Test of Courage and all the comics) the way this story has progressed over the past year has been marvelous to see.

Midnight Horizon practically picks up where the comic series The High Republic: Adventures left off and as a massive fan of that run, I couldn’t be happier about that. It introduced characters and themes to the Star Wars universe that engaged and really hit home with me. And since both the comics and this book were written by the wonderful Daniel José Older, that permeates throughout both the mediums.

The story of Midnight Horizon follows a few separate groups of characters (some old and some new) during their conflict with the Nihil. The books and comics so far have already done a great job of establishing this group as the ruthless but cowardly bunch they are, and considering we’re nearing the end of this part of the story this book let’s us see the final bit of build-up until that final catastrophic event.

Our story takes place on the Core world of Corellia, which we’ve seen a few times before but is mostly known as the home-planet of Han Solo. We’re seeing this planet in a different time-period now, but some things never change apparently, as the Corellian space-ship production is a vital part of this story. I’m trying really hard to not give too much away here. Let’s just say that the Nihil have a pretty clear goal and our characters are struggling to find out what. It’s fun to constantly see them adapting to new situations and applying what they learn to the arising problems. I really enjoyed some of the new perspectives this book offered on the galaxy. Be it Corellian politics or how a bodyguarding business would be run in this universe.

Since I was on the topic of characters just now, they were probably my favourite aspect of the book. Older is able to make all of the interactions these characters have with each other just feel so endearing, it never fails to bring a smile on my face. But the most intriguing part for me was diving into all of their emotional states. At this point the war against the Nihil has been going on for a while and the effects are apparent on a lot of these people.

But even without an intergalactic war going on, I think most of us can confirm life isn’t easy on its own either. Add to that being a Jedi, thus following a certain philosophy and having to find a path inside of that, running a bodyguarding business and navigating your feelings and love for another person, in most cases for people that haven’t reached adulthood, there’s a lot of emotional turmoil that gets explored.

First of all I want to talk about the character that jumped out to me most. Jedi Master Kantam Sy. They used to be the Padawan of the familiar Grand Master Yoda but their story really took me by surprise and felt quite appealing and fresh. It deals with how Jedi aren’t really supposed to form attachments and pursue romantic relationships, and how important learning detachment is (*ahem* Anakin *ahem*) while still highlighting that caring for others is admirable and shouldn’t be suppressed.

Zeen Mrala was already my favourite character from The High Republic since Adventures. And that hasn’t changed. She’s force-sensitive, lives and fights alongside the Jedi, but is not one herself. That feeling of being a part of a group on one hand but also still being a slight outsider really hit home with me. And for her, her past is still chasing her in the form of her childhood best friend: Krix. He joined the Nihil after feeling betrayed by Zeen when she revealed that she could use the Force. The two grew up in an environment where usage of the Force was practically demonized and now Krix is reigning terror all over the galaxy, so Zeen feels responsible. Add to that Zeen’s feelings for Jedi Padawan Lula Talisola, which by the rules of the Jedi might not work out, despite of what the two feel for each other, and back is that emotional struggle.

Now I picked these two out specifically but I could probably write a lot more about pretty much all of the characters, and there are a lot of those.. If I were to tackle them all that would take way too long and I think also think it’ll be way more fun to read of it for yourself, but the baseline is: The characters offer a great emotional core for this story and the way they learn and play off of each other is endearing and heartwarming. There are constant parallels and contrasts between characters and their beliefs but everyone keeps learning from each other or overcoming obstacles due to their relationships with others. It’s all kind of cutesy, which definitely has to be your thing, but the story makes a nice contrast for that.

Honestly I could talk about this entire book for a while but I want this to stay spoiler-free. It’s totally worth a read if you’re looking for a variety of charming characters that interact with each other in very believable ways and really changes your perspective on them throughout. The story is engaging throughout and will keep you interested, but I don’t know if it’ll work as well if you haven’t read any previous High Republic material. It ended a bit abrupt, which is just kind of a shame considering how quickly you’ll probably be able to finish it.