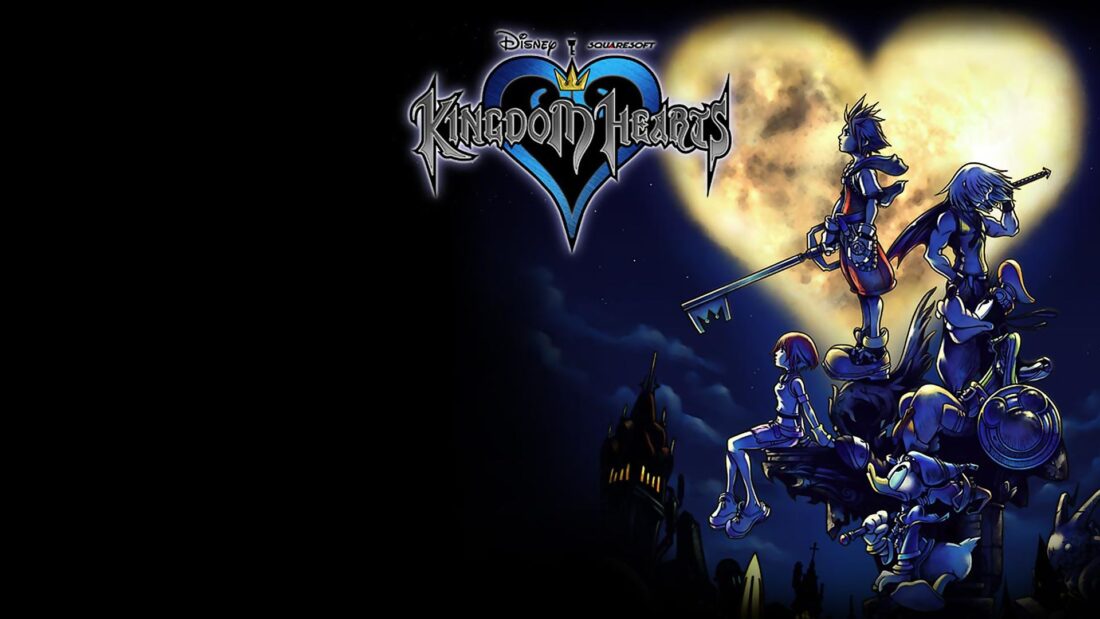 I’ve been trying to check out a few more classic titles lately. Metal Gear Solid, Ocarina of Time and, as you might have guessed, Kingdom Hearts. The presence of the series has always been apparent to me but I never really got around to playing any of it. Until a while ago, when I got access to the entire collection.

WHEN YOU WALK AWA- oh wait, yeah. So Kingdom Hearts is quite infamous for having an incredibly complicated and confusing story, but as the start of the series this game doesn’t really have that. It’s quite simple really. You play as Sora, a young boy who’s friends get kidnapped and then gets thrown into a wider universe, leaving his old island life behind to go search for his friends. He now traverses a universe that is being swarmed by so-called Heartless. He meets up with Donald Duck and Goofy, who are also searching for someone, that being Mickey Mouse. Together they travel around galaxies in a GUMMI ship to visit a bunch of Disney worlds.

This is an incredible cross-over of Disney and Final Fantasy. The style of these animated Disney movies blends perfectly in these 3d environments, making for insanely atmospheric locations. Walking through the woods of Tarzan, the world of Alice in Wonderland or the familiar sands from Aladdin feels great and a lot of care seems to have gone into having the vibe of these movies represented well in the game. All the levels are really thought out and inhabited by characters from the movies, with some Final Fantasy characters thrown into some of them.

This game has a lot to say with its story, and probably a lot of it I still haven’t wrapped my head around. There are confusing elements to it but ultimately it’s definitely approachable.

Now for the other important aspect: the gameplay. It actually holds up surprisingly well! While the combat is quite floaty, hits truly feel like they have impact and you have a lot of customization to do. In every world you also get a Disney character available to put into your party but I personally found myself just using Donald and Goofy. It can be slightly unclear where you have to go at certain points though, but exploring is never all too bad. There are some slight platforming sections here that were also pretty fun.

For the first half of the game I was having a great time, until I hit the boss in Atlantica, which is the world based on The Little Mermaid. Somehow something in the experience switched, for that boss was just kind of a whole load of bullcrap. I was playing on the normal difficulty, didn’t really have trouble with anything up until that point and boom. Ursula just destroyed me. After a few dozen attempts and a whole lot of exploits I finally managed to beat her, but after that the game never really felt as magical as before. Bosses started to feel more obnoxious, and while I managed to get through a big chunk of the game without even upgrading my keyblade I still died to the smallest of hits. Don’t get me wrong, the story and atmosphere were just as good as before, but I started to really dread every combat encounter.

If that was really a problem with the game, I’m not entirely sure. Because as I said, I did go through the whole game with the starter keyblade, but it didn’t really feel like it made a really impactful difference when I switched. Still though, some of the bossfights are thematically incredible and even though some of them were annoying as hell, it was quite satisfying to beat them. It’s just a shame that the back half of the game started to feel like more and more of a chore.

Overall though, I had a ton of fun with this game. While I am planning on playing the entire series, this first game had a great feeling of simplicity and fun, especially in the first half. While not everything was as polished as I had hoped, I can easily see why this game is so beloved by many and it might still be up there with some of my favorites.