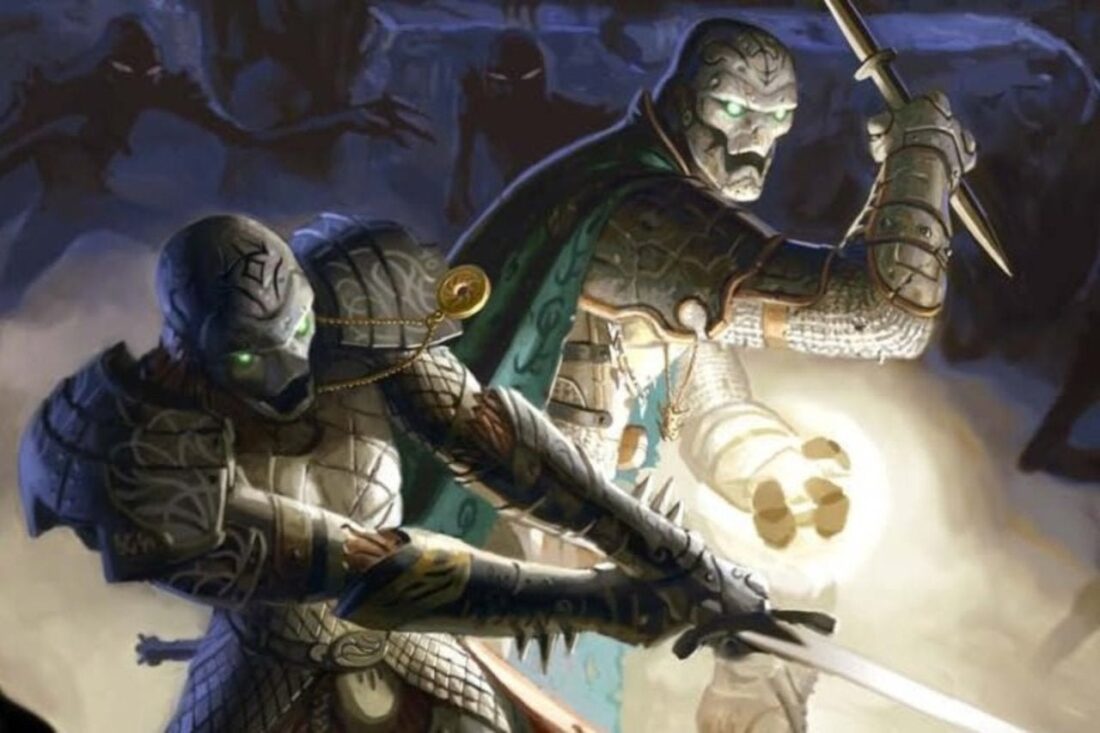 This is a follow-up to a story I posted here a while ago. You can read the first chapter by clicking on the following link: https://dunke.nl/dungeons-and-dragons-prelude-1-a-map-of-red-ink/

It was the 40th day since I left Khalash. By now I’ve wandered through many different area’s. Some green and full of life, others not so much. The area I’m standing in now, belongs to the latter. It is in the mountains. Everywhere I look there’s rocks and little pools of a black liquid substance. Smoke rises from a few small cracks in the ground. Not like I care, I have another purpose here. A mountain tribe has been attacked by some sort of monster lately. First it only took food, but now people are starting to disappear. The interesting part is that these attacks happen all the time, not just at night. And this is the perfect place for a creature so bold.

It actually doesn’t take me long to find the cave it probably resides in. There is a small tunnel in the walls of what looks to be some kind of dome. Pretty big rocks are scattered all throughout here. After using a simple spell to set my hand on fire my suspicions are confirmed. Some of the bones still have meat on them. The cave stinks, I think. I don’t exactly have a nose. After about 30 minutes of thoroughly searching the cave it’s time to give up. I should probably set up camp nearby and wait for the beast to return to its lair. “Well, time to make for the exit.” I loudly remark. Right when I walk trough the entrance a large wolf-like beast jumps on top of me and pushes me to the ground. It looks like some crazy wizard mixed together a wolf and an octopus. Not a pretty sight, but at least I found what I was looking for. A familiar feeling starts to swell. “Threat level: 50%.”

I press my still burning hand on it’s side. The beast roars and jumps off me. I roll back and look it straight in the eyes. It looks angered. Only now do I get a good look at it. ‘It’ of course being a Varlon. Looking like a wolf, with octopus-like tentacles and a beak. I see the mark of where I put my hand on its pelt. It must hurt a lot, but the beast seems to only have one goal. Then we have that in common. Now that I think about it, this creature and me aren’t really that different from each other. We both fight and kill to survive, because that is what we were born to do. But it seems like the time for thinking is over. The Varlon starts circling around me, but our eyes stay locked. It let’s out a threatening growl. Any moment now. I bring my right hand to the sword on my back, just to feel that is not in its sheet. I break eye contact and yes, there it is on the ground. It must have fallen of my back when the beast smacked me to the ground. This definitely complicates the matter.

The time to think gets cut short though, as I can see the Varlon starting to speed up towards me. I have to think fast if I want to make it out of this alive. Fortunately I don’t have to rely solely on swords in a fight, I wouldn’t have survived long if I did. Its charge is easy enough to dodge. An enraged monster is careless, but that still doesn’t mean it’s not dangerous. In fact, when enraged it becomes unpredictable, which would arguably make it even more dangerous.

I am still too far away from my sword, so I’ll need to figure out something else. I quickly raise my left hand and murmur a few words. A ray of fire shoots towards my opponent, who is a little to late to jump out of the way. The Varlon’s pelt is on fire and it seems in a lot of pain. It feels far too over the top to hurt it like this, but I just can’t help it. It’s how I was made to fight. Ever since the beginning it had to be gruesome. At first it was fine, I didn’t know any better. But now, I would like to just get this over with. The Varlon now let’s out a high pitched cry. I think this bought me enough time to go and get the sword. I sprint towards where it’s laying and quickly pick it up. Just when I’m about to turn around I get hit by something and fly about 10 feet into the air. Luckily my metal plates don’t seem to be too damaged when I hit the ground, so I can stand up quickly. The beast isn’t on fire anymore, but I can still see the scorch marks. I run towards it, dodging a big rock in my way. It seems confused that I’m now charging it, which gives me a small window of opportunity. I ready the sword and jump in front of it. Too late, it already stepped out of the way so now my strike just hits the stone floor. The Varlon lashes out with it’s left claws, ripping away a piece of cloth above my shoulder pad, leaving a big scratch in it. Now I’m done for real. I use some magic to heat my left hand and quickly grab it by its pointy ear. The creature now screeches in agony, but I finish the job in one quick strike. First I cut its knees, then when it falls to the ground I plant the sword in its head.

With a fresh Varlon pelt on my back, I start on the journey back to the tribe. I choose to travel down, so that the terrain is less annoying travel on and so I can set up a more comfortable camp than the one from last night. I find a nice sheltered spot, not too far from the road. Then I just sit for the rest of the night. I’m listening to the sounds of the forest around me. After 6 hours I have heard 25 rabbits, 14 squirrels and an incredible variety of birds chirping in the trees. I can hear the wind blowing above those same trees. And so I sit for hours. Then it is time for me to move on. The first rays of sunlight start to break trough and I still have a tribe to inform. For a long time it is quiet on the road. Then, I suddenly hear a voice. It is… singing?