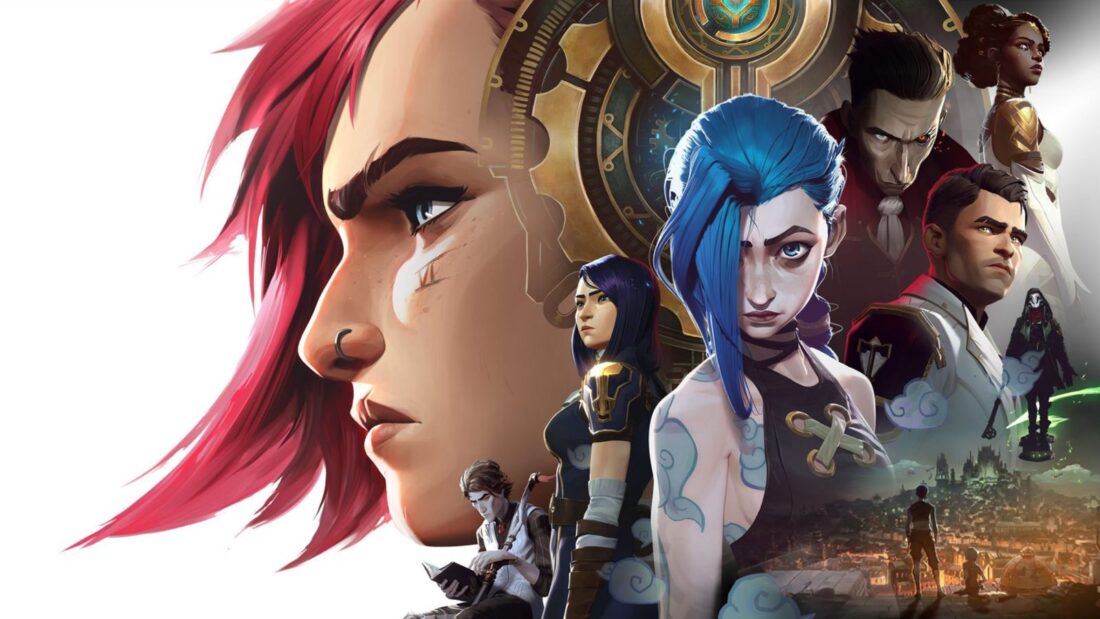 I’ll be honest, before watching this show I had no interest at all in the League of Legends universe. While I still really don’t care about the game itself, I can definitely say I am intrigued by its universe, and Arcane is the perfect way to introduce yourself into it. I don’t think it’s a surprise when I say that this show is one of the biggest hits of this year, and most definitely with good reason.

So yes, Arcane is set within the universe of the incredibly popular game League of Legends. While I’ve personally never played it, and have no intention too, I never felt overwhelmed. League has existed for a really long time and thus has a ton of lore that most people simply aren’t familiar with. But from what I’ve heard this show stays very true to it or simply fills up gaps in what was already known, which makes it incredibly easy to pick up even if you have absolutely no clue about what is going on or where you are. Arcane doesn’t seem to be too concerned with making connections to all of League of Legends, rather staying very much within its own lane. It really focuses on the story it wants to tell right here and I really liked that. It’s like how The Mandalorian season 1 was very much a Star Wars story but felt very self-contained. I really like these kind of ‘restrained’ stories, especially since I’m not very familiar with the broader universe.

Now I know I just used the word restrained, but that isn’t really appropriate I think. This is not a boring show, actually it’s far from it. Where Arcane is quite contained in terms of the locations and parts of the world it takes place in (which again, is a good thing), it more than makes up for that in how greatly realized the story and characters are. The scale of the story grows continuously and then certainly ends explosively, which left me completely baffled and wanting more, but also completely satisfied me with what we got so far. The story largely revolves around a few plot threads, that ultimately meet each other in an incredible finale. It starts out on a relatively low scale, which is great to introduce us to our main characters, but as it goes on the mood gets darker and heavier, without ever becoming depressing. I can’t quite put it into words, but it’s good okay? Trust me.

The show really thrives on its characters. From main ones like Vi, Jinx and Jayce, to the people we see getting introduced that help develop those characters, all the while also experiencing growth themselves. It’s truly astounding to me how every single character seems to have such a complete and compelling story to them, so that they stay fun to watch. I think anyone can find at least a single character that they root for, and I’m also sure that character will have had a satisfying story or arc when the show ends, so everyone can get some mileage out of watching Arcane. Honestly my only complaint that’s keeping this show from being perfect is that I just wanted more of some of these characters, just because they are that enjoyable to watch. Fortunately, a second season is coming!

So, the story and the characters are all good, it’s all easy to follow, but one of the other notable things about Arcane is its style. The show looks absolutely gorgeous. You could honestly build a whole art gallery with just shots from this show. There’s not much more to say here. It just looks really good. Every character is also really fun to look at. They all just feel really unique and different in just the looks and their mannerisms. They’re really well animated and they’re even more believable because of the great voice acting. Just everything about it works, and it’s clear a lot of time and care went into the look of the show. Next to that the action-sequences are completely bonkers due to some crazily creative action and music that really elevates every punch or shot. Atmosphere is completely on point, is what I’m trying to say.

I think it’s quite obvious that I like this show, and I think a lot of people will do too when they watch it. We already know a second season is coming, and if you’ve seen the show you’re probably very happy with that. The show works great as it is though, and is probably the best show from 2021, maybe ever. From the world, characters and story, everything works well and I can’t wait to see what we’re going to see next. Honestly, while I know next to nothing about League of Legends lore, I kind of hope it’ll step away from all of that and go kind of a separate universe route, just so it can continue to feel this creative. But while we wait, I think I’m just going to rewatch Arcane… again… for the third time…