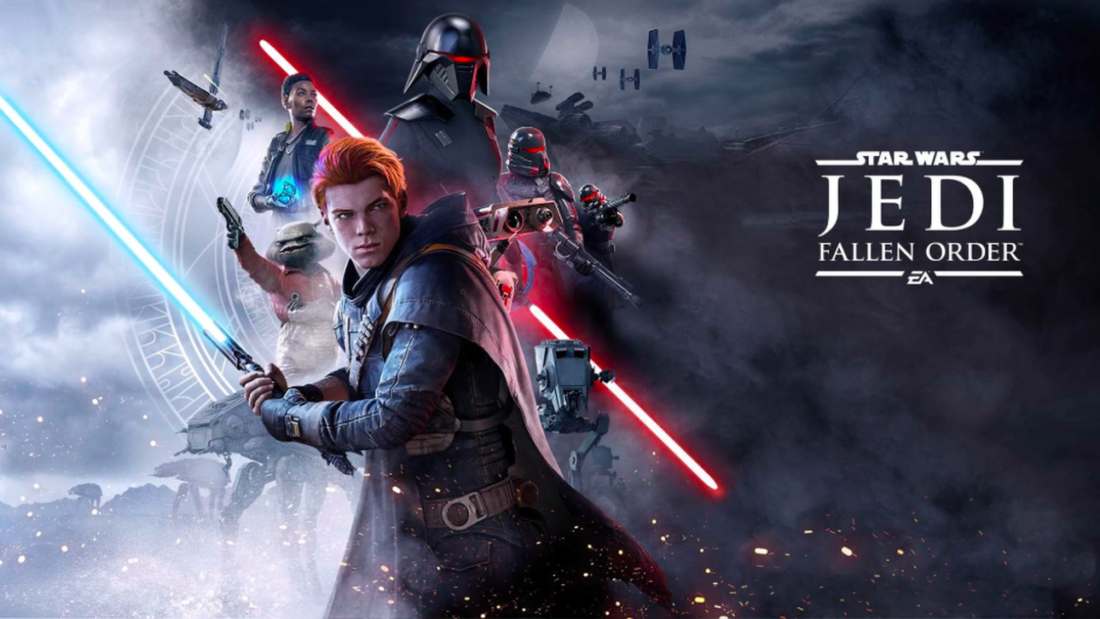 Disclaimer: Story spoilers are in this review. Enter at your own risk. The conclusion will be at the bottom.

Oh boy was I happy when I first heard about a new Single-Player Star Wars game. It all sounded like it would be incredibly interesting, with the story taking place in the period between the events of Revenge of the Sith and A New Hope and following a young Jedi Padawan who has to deal with the aftermath of The Emperor’s Order 66 *cackle*.

In Star Wars Jedi: Fallen Order you play as Cal Kestis. A young Jedi Padawan who survived Emperor Sheev Palpatine’s Order 66, which made all the clone troopers fighting alongside the Jedi suddenly turn on them. This causes Cal to lose his Master, Jaro Tapal, and being stranded on the scrapper planet of Bracca. Trough a set of events he eventually is discovered by the Empire and its inquisition. Now a prey, he meets a crew, consisting of a former Jedi who handles communication and a 4 armed alien who pilots your ship, The Stinger mantis.

The main plot revolves about obtaining a list of Force-sensitive children from all over the galaxy, so they can rebuild the Jedi Order. Oh yeah, and also keep that list out of Imperial hands while they’re at it. You hop around from planet to planet and regain your connection with the Force. To accompany you on your mission you have BD-1, who is a little pupp- I mean droid who can help you with traversing the environment and scan the various worlds and it’s inhabitants (or invaders) to complete your databank.

Gameplay is just as important as story in this game. And I am pleased to say that even on multiple runs through the game it just doesn’t get stale. This is largely because of the big variety in enemies and the constant stream of new abilities you obtain. Throughout the story you unlock new abilities that allow you to approach combat encounters differently and solve puzzle’s on earlier planets that you couldn’t solve before. You can also improve those abilities by getting skill points, which you can invest at a meditation point. Those meditation points are like the Bonfires of Dark Souls. You can save, spend skill points and rest, which refills your health and STIM-canisters (BD-1 carries these, they regen your HP) but also respawns all the enemies you’ve killed.

While traversing the landscape of the well-designed planets, naturally you will come across some hostile forces. That could be the Empire, but also the original inhabitants of the planets, like spiders and other creatures that enrich the Star Wars lore. Fighting works quite good. Everything about Cal screams Padawan. He has a very raw fighting style, similar to Luke Skywalker, because he never finished his training. But that certainly doesn’t mean you don’t have cool moves at your disposal.

The bossfights are easily the best things in the game for me. Their designs are really cool, they have incredible move sets and they are incredibly intense on the higher difficulties. Some bosses are quick and agile, others big and slow and then you have slow movers but with unbelievably fast attacks. It is good design and I am happy they added the Battle Grid so you can fight them without having to go through the entire game again.

Of course, it can’t all be that way. As there are still a few problems. Playing on the standard PS4 went well for the most part, but every once in a while the game just freezes completely or character models make some really weird moves. Nothing game-breaking of course, but it doesn’t help the immersion.

Something else that is quite annoying is backtracking on certain planets. A lot of the times your path is pretty straightforward, but once you go deeper in the levels to search for chests, and other hidden stuff it is most likely you will spend a while to get back to your ship.

All of that however, are just minor inconviences in the face of what the game gets right. It truly is a worthy installment in the franchise. Definitly on the top with the LEGO games!