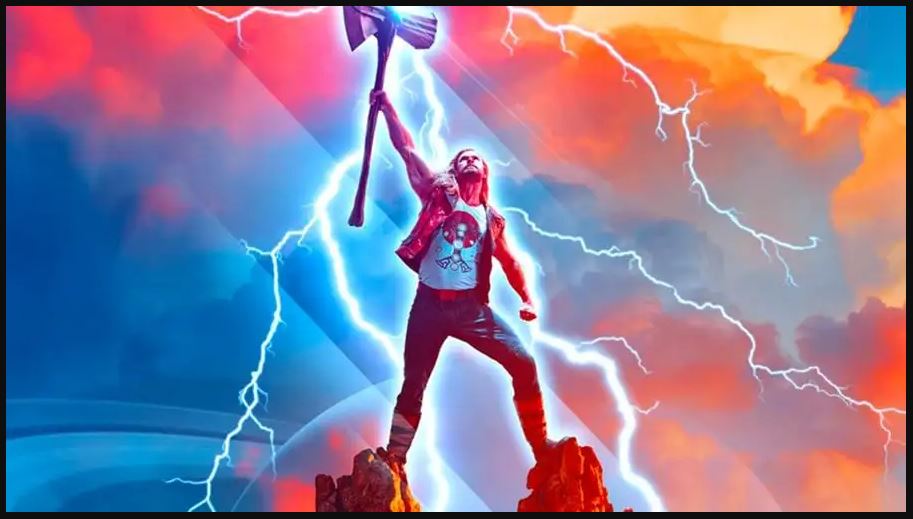 Thor: Ragnarok is in my top 5 favourite MCU movies. It is a fun space-adventure that took the character of Thor in a completely different direction than what we had seen of him up until that point. The way it manages to drive Thor’s story ahead in an emotionally engaging way while still offering us these comedic scenarios featuring other beloved Marvel characters, among other things, make it one of my favourite MCU experiences to date. Still, there were some issues I had with it. When the news of Thor: Love and Thunder broke I could only hope it’d be as good as its predecessor, and maybe by some miracle, even surpass it by hammering out those small gripes I had with Ragnarok.

To just put it bluntly: it didn’t. But that isn’t to say I disliked it. There are a lot of things I absolutely adored in Love and Thunder. Sadly it just didn’t really improve upon the previous movie in certain elements, and felt lacking in departments that Ragnarok did very well. These are some very surface-level thoughts, as I will be going into some more spoiler-sensitive stuff later on. I’m not going to go into great detail about most things, but if you want to go in 100% blind, you might just want to come back later.

In general: if you loved Thor: Ragnarok you’ll probably find a lot to enjoy here. If you’re looking for an insane improvement of that movie though, you’ll probably be disappointed.

Possibly some light spoilers from this point on.

The biggest gripe I have with Love and Thunder is its runtime, and as a result the pacing of the movie. It tries to juggle a few different plotlines and manages to catch a few, but stumbles on others as a result. When it comes to pacing, most of my issues were present in the first half. The first 40 minutes or so consist of a lot of recapping of previous events. We get a lot of insight as to why Thor is the way that he is at the moment and the trauma that comes with it. It’s kind of a heavy subject, undercut by Taika Waititi’s comedic way of telling it. On one hand this makes it a bit more approachable, but it would’ve been nice to have it just be a little more intimate considering Thor’s characterization in Avengers: Endgame was handled in a similar way. This would’ve been the perfect opportunity to delve a little bit deeper into the psychological turmoil it causes for Thor.

Thor himself also just didn’t really work that well for me. He had some pretty good moments and a genuine arc that pushed him and leaves him in an interesting place for further stories. It was just that in the middle there was practically nothing that led to interesting development. While it was entertaining, it just wasn’t particularly compelling. Additionally I want to talk about Gorr for a little. I’ll go into the things I liked in a little bit, but even though Gorr is one of the best villains in the MCU to date, I felt like we just didn’t see enough of him. We don’t really see him actually butchering gods, or really fighting anyone other than Thor.

Then my last complaint: some of the visuals. For the most part they actually look really good! Environments are colourful and have some genuine identity to them or are just really nicely stylized (If you’ve watched any of the trailers you probably know the part I’m talking about). At other times though, the backgrounds just didn’t really seemed to blend very well with the rest of the area, or the CGI just looked off. It’s probably the result of the VFX teams being spread pretty thin over the insane number of projects we’ve been getting these past few years, but it’s noticeable and I hope that if it’s talked about more or the projects are more spaced out (which definitely would be for the better) it will improve for the artists working on them and thus the result we’ll see on screen.

I know it kind of sounds like I disliked quite a bit. And there’s definitely a lot of stuff that stuck out to me while I was watching, but that doesn’t take away from the amount of fun I still had watching it. If you ask me, a lot of the comedy was on point. Sure some jokes weren’t needed in their contexts, or just didn’t really land for me, but I got a lot of genuine laughs out of this. There’s a very pure and adventurous vibe to it all that kind of reminds of the Guardians of the Galaxy movies, which kind of makes sense considering they’re in it (albeit briefly). This movie really takes a surprising step into developing the cosmic side of the MCU as well, with one particular reveal having me insanely excited and it turned out just as satisfying in the end. It was something I never expected to see in an MCU movie, especially at this point, but it was integrated perfectly.

Talking other highlights, I mentioned it earlier but I actually really did like Gorr in this movie! Most of that is to thank to the maniacal performance of Christian Bale. He exudes so much menace from the way he’s brought into frame, to the way he talks to other characters. If not for my previously talked about complaints, he might just be my favourite MCU villain so far. Now while we’re on the topic of characters, Jane Foster is back! Love and Thunder adapts the Mighty Thor storyline from the comics, where Jane is able to pick up Mjolnir and transform into Mighty Thor. The movie takes that story and works with it really well. It’s fun to see her try to figure out some of the superhero stuff, while hiding a pretty heavy and sad reason behind the power-up.

Along for the ride are Korg and Valkyrie, the first of whom you kind of know what to expect from if you’ve seen Ragnarok. It worked for me, but with every comedy, if you don’t really like the kind of humor presented that’s kind of detrimental to the experience. Valkyrie is awesome. If you ask me she was a little underutilized but when she had a few nice moments.

As I said earlier, Thor: Love and Thunder is simply a very fun movie. There are definitely that drag it down from the greatness it had the potential to achieve, but it entertained me all throughout. It’s quite hard to talk about a lot of what I loved without spoilers, but let’s just say that this mix of cosmic weirdness with some dramatic real-life elements made this a fun watch for me. I only wish there was more of it. It would have benefited from a longer runtime to flesh out the threat and some character arcs more.