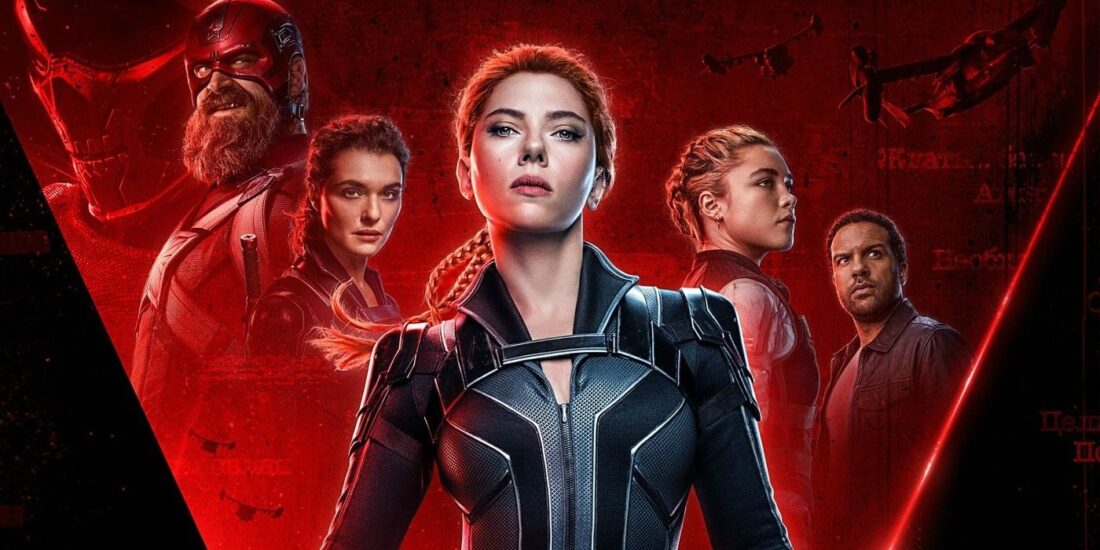 Sometimes when I’m bored I write a short review on a movie I’ve seen on my Letterboxd account (www.letterboxd.com/Dunkie/). These are too short to post on here though, but I figured I could do a little roundup every now and then to look at the ratings.

While by no means it is the best Marvel has ever done, it was nice to see a Marvel movie in the cinema again. And luckily it wasn’t half bad. We follow Natasha a little while after Civil War, while she’s on the run as a fugitive of the Sokovia Accords.

The biggest problem with this movie to me, is that moment it takes place in. Or rather, the moment it came out. It’s probably not a surprise to many that Black Widow died in Avengers: Endgame. While of course it takes a bit of tension away in this movie, I couldn’t stop but think that the impact of both this movie and her death in Endgame would be so much greater if we had gotten this movie sooner.

But hey, there’s not a lot we can do about that right now. And it doesn’t take away that this is a fun watch. I liked the new characters. David Harbour was hilarious as the Red Guardian and I’m excited to see where Yelena’s character goes. It was also nice to see and hear a little bit more on Natasha’s history, although the opening montage seemed to imply a darker tone that wasn’t really in the movie but I would’ve liked to see.

Overall though, it was a nice movie and I’m always happy to see some more Marvel. Nothing groundbreaking, but it was enough for what I expected.

The cinema’s reopened so I just booked the first seat I had the time to see a movie. I just loved being back in there, with popcorn, very little people (I went in the middle of the day on a monday) and I was hyped already when the advertisements started. I missed this so much.

The movie is fine. It’s big monke hitting big lizard and I loved it. It’s bombastic. The cinematography especially stood out to me. There are a few really good shots in here. The plot has a few shaky bits so to say, but hey, who watches such a class of Kaiju for the plot anyway? Maybe you do, I don’t mind. I just like it. There are some very cute moments between Kong and the humans, although that kinda lacks on Godzilla’s side. I was definitely more interested in Kong’s side than I was in the story of Godzilla, but I think they struck a nice balance between the two.

Anyway, not much more to say. It’s fun, I like it, I’m happy the theaters are open again.

This movie is actually hilarious. The practical effects are awesome, even to this day. It’s a ton of fun to watch, and even though the scary aspect didn’t really hit for me I can see what the fuzz is about for this one.

The Mitchells vs. The Machines

It’s funny, it’s emotional, you might laugh and then cry 2 minutes later, only to start laughing again immediately after. It doesn’t seem like it’s 2 hours long, because it’s a constant stream of entertainment. Watch it with the people close to you, it’ll make it even better.

*breaths in*
Okay… here we go…

So like… giving credit where credit’s due? I guess they tried? They tried to make it interesting by posing a few questions? It took a creative twist, but the execution, in my opinion, is just awful.

So this movie sees Microp*nis (Michael Peña, but dubbed this because my friend misheard me saying his name. I didn’t use the character name because I forgot for 3/4 part of the movie. Still love you Michael <3) having some weird dreams about a kind of invasion of humankind? It’s not a bad set-up to be honest, for the first 30 minutes I thought I’d just be looking at an average sci-fi movie, just some time-killer but oh god, it got worse. You see, halfway through the movie it is revealed that the alien invaders are actually humans, but dressed up. Then we learn that Micro’s visions are actually memories because the same thing already happened when the humans got mad at the robots (Micro and his family are robots, yeah, what the fuck )but then they got therapy which erased their memory about everything but also didn’t really actually because most people apparently knew what happened but chose to forget. Are you still following me?

So everything is calm and peaceful but now out of nowhere the humans show up because they’re still mad at the robots for shit that’s never really specified, although they implicate it has something to do with a robot uprising? (To be fair, they allude to this in kind of a flashback and some dialogue but it’s still vague as hell, Rick and Morty S5E1 did a way better job at this.) So then they shoot some more of the humans and go away on a train.

although going on a train seems kind of useless to me seeing as the humans have literal spaceships they can just… follow you with? Actually, I shouldn’t complain. It ended the movie and I’m grateful for that.

I truly hate being this negative. I usually manage to get some kind of enjoyment even out of very bad movies but this just kind of sucked me dry. Or well, I did laugh a lot, so maybe it’s not all bad, right?

My friend said it best: “It’s basically if Pixar made a Ghibli movie.”
Pixar’s best recent work. I loved it so much and even though everyone told me it’s not the heavy hitter you expect the ending still had me end up in tears.

I could go on and on about the visuals, the characters, but honestly I think it’s better if you just go watch it. Maybe I’ll write it all down someday. For now I’m just going to enjoy the fact I saw this beautiful movie.

I should probably be lynched, for I claim to love sci-fi but have never seen this movie. Now that I have though, I’m so glad I did. I adored every second of it, from the atmosphere to the soundtrack. I probably don’t even really need to tell anyone about how great it is but my god is it an incredible watch.

Harrison Ford of course sells the role of the scoundrel-esque cop/Blade Runner and I just couldn’t keep my eyes off of him. I also thought Rutger Hauer played a great antagonist. I’m sure there’s a lot more meaning to it all once I’ve seen it a few times. This movie was just right up my alley and even though I am ashamed I didn’t before I’m incredibly glad I watched it now.

That was all for today then. Thanks for reading and see you at the next one!